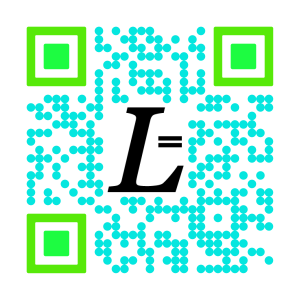 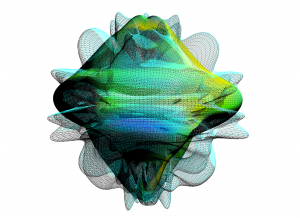 A show exploring the science and research of the fundamental nature of reality. Inspired by the Muon g-2 experiment, this show explores vibrations, spherical oscillations, data and the infinitely small scale of the universe.

Our time as the 2020 Fermilab Artists-in-residence was an incredible and unpredictable adventure. What started out as a rare up close and personal exploration of one of the most historic and premier science laboratories in the world, quickly had to adapt to the limitations set by the pandemic. As with all obstacles and challenges we had to redouble our focus and redefine our strategy.

Admittedly, our experience was met with a bit of disappointment in the face of events. However, among the fundamentally shared elements of all things creative, in both art and science, is resilience and fluidity. As visual artists, our personal approach to the creative process has always been inspired by our experiences in which we look to absorb and interpret our subjects. With no access to the laboratories due to the shutdown, our experience would have to adapt and with it, our subject and approach would naturally have to change as well.

One of the first things we learned, with regards to the level of research we were exposed to, was the sacrosanct rule of exploration – rather than risk coercing an outcome you follow the path to where it leads.

NASA, but in the opposite direction:

Our new path would reveal itself between a great deal of self study and our conversations with some of the incredible minds behind the study of nature at its most infinite reaches. The idea that space on the quantum level is equally as expansive as outer space can seem counterintuitive at first, until you get it. There is a kind of ‘“aha” moment when you understand that in the precision and scale of studying the infinitesimal, it is as vast and awe inspiring as the search for stars and galaxies in the observable universe.

Where we had originally anticipated absorbing the atmosphere and complexities of the experiments being conducted, we found ourselves quietly exploring aspects of the fields within particle physics that we never imagined to comprehend.

We often have described the act of creating art as a poetic expression of its subject material, a kind of translation. In this, our main goal from the very start was to create an expression that could draw direct relationships between this stunningly complex subject and connect it to the larger realm of the human experience. A way to show that within the densely intricate mathematics and abstract theories behind the physics of our invisible universe, there was a symmetry and sameness shared with the world and experiences on a human scale.

The biggest takeaways that we could have made in observing this dimension of the universe, was the unexpected understanding, that within all of these fiendishly complex ideas being explored and fused with incredibly intricate machinery, massive particle collisions and inconceivable energies, is that the world at the quantum level was not simply made up of  “tiny things”. That in this shared sameness, the quantum world is nature. The quantum world is life.

With all the exciting research and discoveries being made at Fermilab the subject material at our fingertips was immense.  With so many groundbreaking experiments being conducted at any given time we had to hone in on an idea that we could grasp and express. In this, one experiment in particular stood out. The results of a decades long string of experiments seeking to confirm an odd anomaly would be announced during the time of our residency.

In quantum physics you often come across the term “spin’. At its base it has to do with orbitals and rotations, momentum and probabilities. It is a form of angular momentum which is a fundamental property inherent across all the scales of the universe from molecules and organic matter to mechanics, tidal movements, hurricanes, light, planetary motions and galactic spirals. The quantum version is similar but strikingly unique. It is a curious and complex idea to grasp and even more mystifying when you do.

We’re not here to explain this subject within the language of quantum physics, the task of the artist is to draw connections within the abstract and seek to express these challenging concepts with the goal of inspiration. The idea of “spin” is easier to imagine as tiny balls of competing waveforms layered on top of each other. All energies are waves, analogous to sound waves or the rolling ocean, similarly, these quantum energies have their own pulses and rhythms. On their own scale, they are huge. They have troughs and peaks and when they overlap it is easy to imagine them as intersecting ripples in a pond. As the waves radiate outward, they create not dissimilar patterns of interference. Thinking of them as sound, these energies form patterns and these patterns compound to form harmonics and nodes within their own environment. The main difference with this parallel is that these energies are not linear, they are standing waves, in spherical form.

It is within these shared properties and analogies that we found our inspiration. Sound waves, lightwaves, currents and tides, particles and spin. The connection we were looking for was in finding sameness and a way to visualize the interactions of the infinite.

For this series we developed an interactive program that visualizes spherical standing waves.  The program allows us to explore myriad ways to imagine how these forms of energy might look at a slower pace, less than the speed of light, and visible to the naked eye.

The end result is a vibrant series showing data points across the surface of two independent spheres that we can manipulate and control. This visualization expresses the potential movements of spherical waves with varying amplitudes, and expresses this complex understanding of reality in a way that is enigmatic, colorful and filled with energy.

Why are Art and Music at Fermilab?

To View the presentation- coming soon

Artists as translators: Expressing immense ideas on a human scale

They will be discussing their work and the creative process of translating complex subjects such as infinity, scale and time.

In 2014 they began their series Dataatadata, a play on Dadaism, centering on the beauty of information and the poetry of numbers, and how they can be used to express immense ideas in a visual and experiential way.

Decoding subjects such as higher dimensional math and particle physics has become the focus of their current work.  They will be discussing their experience at Fermilab and their deep dive into the quantum universe, as they search for larger narratives and meaning in the complex and elusive world of particle physics.

To View the presentation

During our residency at Fermilab our focus is the development of compelling and meaningful visual interpretations of the science and expression of the infinitesimal universe of atomic structures and subatomic particles. Using the visualization of data surrounding the study of these particles we will be creating a destination installation, an on campus immersive experience with sound and interactive projections.

Chris Klapper and Patrick Gallagher, a Brooklyn based duo, embarked on their first direct collaboration with their hugely successful installation, Symphony in D Minor, a self-contained thunderstorm, which is now part of the permanent collection of Hydropolis Museum in Wroclaw, Poland. Their work is multimedia and multidimensional, their subject matter is driven by specific projects, environments and experiences.  Overall, they look to explore new technologies and to use them to express immense ideas on a human scale; employing sound, sculpture, video, projection mapping, composites, digital new media and performance.

Chris and Patrick’s art has exhibited in NYC, Boston, Philadelphia, Miami, Oklahoma, Spain, Italy and Poland.  Their works have been written about around the globe in Forbes, Fast Company, The Atlantic, Designboom, Creators Project, TSpain: The New York Times Style Magazine and Wallpaper to name a few.  They have received grants from The Brooklyn Arts Council, Black Rock Arts Foundation and TC Fund and were resident artists at La Fragua, 2424 Studios and The Invisible Dog Art Center.

More of their work can be seen on their website

Continuing our collaborative series Dataatadata, a 21st century play on Dadaism, concentrated on the enigmatic beauty of raw information and the poetry of numbers.

Beginning the exploration of hexadecimal expressions compiled from the raw detector data coming from the MicroBooNE experiment at Fermilab.

Just like neutrinos, our new series “Ghost Particle” is invisible. The only way to see these pieces are when there is a reaction, such as light causing a shadow on the wall, or being picked up in the carving.