Lindsay’s artistic practice grows out of an intense curiosity about the ways our society is supported by science and technology. She uses her training to create art about the hidden realities of our world. As Fermilab’s first artist in residence, she worked with scientists, members of the operations crew, and numerous staff throughout the lab to learn the basics of high energy physics. She was inspired to create a body of work that reflects the beauty of the research and the dedication of the women and men here at Fermilab and around the world.

The project sheds light on both the smallest frontiers and the structure of the universe: the subatomic realm of neutrinos, quarks and leptons as well as the research into dark matter and dark energy. Lindsay is fascinated by the behavior of nature’s fundamental building blocks that make up all that we see. She views the project as an ideal way to invite others with little or no technical background to explore the very underpinnings of reality itself.

Medieval illuminated manuscripts inspired me to create artist’s books that express the exciting research being conducted here at Fermilab and at other physics labs around the world.  The ancient manuscripts were used to transmit the most important information of their day. My books illustrate the deep and fundamental connection between particle physics research and the origins of the universe.

The format for each book suggests the leviathan detectors and electronics used to detect particles, the mysterious structures of the universe, and the layered information the universe yields to researches after careful investigations.

The fan books suggest the circular shape of detectors like CMS located at CERN. Using creative license, I suggest the silicon tracker, the electromagnetic calorimeter, and the hadron calorimeter as well as other hardware in the structure. All the books are meant to suggest our incremental understanding of the universe. Through the efforts of dedicated women and men here at Fermilab and around the world, scientists are helping to unravel the mysteries of the universe.

For the two large textile pieces “Dark Glamour: Neutrino I and II”, I am using the visual metaphor of nets to suggest how detectors capture images of these rarely interacting, elusive particles. The art borrows techniques used in high fashion to project an image of dark glamour.

I used seed beads in three color to express the dynamic nature of neutrinos because the particles oscillate from one flavor to another and back again. Three miles of metallic embroidery floss, separated and reorganized, form the representation of the beam generated by the accelerator division at Fermilab.

Our universe is permeated with neutrinos — nearly massless, neutral particles that interact so rarely with other matter that trillions of them pass through our bodies each second without leaving a trace. These tiny particles, studied in world-leading Fermilab experiments, could be key to a deeper understanding of our universe.

The Standard Model of particle physics is a breathtakingly successful conceptual tool we use to explain our universe. It tells how the vibrant and exciting cosmos in which we live can be explained as endless combinations of a few key building blocks, governed by a handful of principles. Using leviathan accelerators, scientists are able to probe deeper into the most basic components of the universe and the rules that govern them. The final prediction of the Standard Model was the Higgs boson and it was recently discovered at the Large Hadron Collider in Europe. I was intrigued by the visual and intellectual challenge to express this powerful conceptual tool. Using information gleaned from the collaboration, I used dyed textiles, embroidery and other techniques to express the elegance of the Standard Model of Particle Physics. I’ve included references to the Higgs particle in each of these pieces. Although predicted in the standard model, it took researchers over 30 years to prove its existence experimentally.

The accelerator division is responsible for insuring that the best beam possible is delivered to the experiments. These drawings celebrate the nature of the particles and the powerful magnetic forces that help control them. I’m using a technique of wet on wet ink to express the wild nature of the particles and the magnetic forces controlling them.

Accelerator science is all about riding a bucking bronco of particles. Understanding how this energetic beam behaves shows that nature is not just about birds and fluffy animals. Fundamental particles are part of nature too. Because the particles in this beam all have the same charge, they want to spread out. More than 1000 super-conducting magnets strategically placed around the Main Injector steer and compress the particles while they travel near the speed of light. Then they are shot into a target. Sometimes, but rarely, neutrinos collide with other particles and scientists can use that information to study their behavior. Without this complex machinery, Neutrinos interact so rarely that it would be almost impossible to study them in one person’s life time. 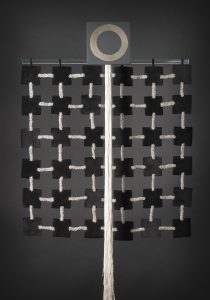