A wormhole, also known as an Einstein-Rosen bridge, is a hypothetical tunnel connecting remote points in spacetime. While wormholes are allowed by Albert Einstein’s theory of relativity, wormholes have never been found in the universe. In late 2022, the journal Nature featured a paper co-written by Joe Lykken, leader of the Fermilab Quantum Institute, that describes observable phenomenon produced by a quantum processor that “are consistent with the dynamics of a transversable wormhole.” Working with a Sycamore quantum computer at Google, a team of physicists was able to transfer information from one area of the computer to another through a quantum system utilizing artificial intelligence hardware.

Lykken, a Fermilab distinguished scientist and former deputy director of research, earned his doctorate at Massachusetts Institute of Technology, and has previously worked for the Santa Cruz Institute for Particle Physics and the University of Chicago. He began his tenure at Fermilab in 1989. Lykken is a fellow of the American Physical Society and of the American Association for the Advancement of Science. The Fermilab Quantum Institute leverages existing Fermilab expertise and infrastructure and partners with leading quantum information science researchers to pursue high-impact QIS research and development, while advancing high-energy physics applications.

This talk will be presented virtually on the Zoom platform. Reserve your spot just as you would order a ticket on-line at events.fnal.gov. We will send an email reminder one week before to the talk, and then the Zoom link one day prior.  All times reflect Central Time Zone.

Fermi National Accelerator Laboratory is supported by the Office of Science of the U.S. Department of Energy. The Office of Science is the single largest supporter of basic research in the physical sciences in the United States and is working to address some of the most pressing challenges of our time. For more information, please visit science.energy.gov 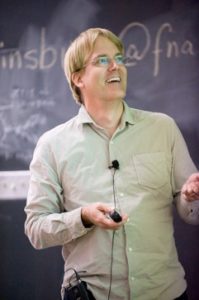