Sports occupy an important part of American life as well as other parts of the world. It is often difficult to flip through the TV channels without encountering sports shows. Surprisingly, large fraction of the intriguing and often spectacular sports actions and feats can be explained using relatively basic physics concepts.

In this talk Dr. Jung will explain the physics behind some astonishing effects created by the spinning and also non-spinning balls in popular sports, which you most likely have wondered about at some point, using basic concepts in classical mechanics and fluid dynamics. He will also show that many effects you see in various different sports are actually coming from the same physics principles. If time allows, Dr. Jung will briefly comment on the “Deflategate” controversy involving NE Patriots as well.

Prof. Jung came to State University of New York (SUNY) at Stony Brook in 1990 from Stanford University. He participated in various particle physics experiments based on high energy particle accelerators at Stanford Linear Accelerator Center and Fermi National Accelerator Laboratory. In 1991, recognizing the importance of the neutrino physics in the coming decades, he started a research group called Nucleon decay and Neutrino (NN) group at Stony Brook to study neutrino properties and search for proton decays. Since then, he and the NN group have been participating in the Super-Kamiokande experiment that made a historic discovery of the neutrino oscillation phenomenon resulting in Nobel Prize in Physics 2015; the K2K, the first accelerator-based long baseline neutrino experiment; and the T2K long baseline neutrino experiment that discovered appearance of electron neutrinos from a muon neutrino beam. He also led an effort to build a deep underground science and engineering laboratory as well as a next generation nucleon decay and neutrino experiment in Colorado. He is now shifting his research effort to the Deep Underground Neutrino Experiment (DUNE) in the US. DUNE is expected to discover charge-parity symmetry violation in the lepton sector, which will provide an important clue for us to understand the matter-antimatter asymmetry in the universe.

Prof. Jung introduced and developed two new courses at Stony Brook: “Light, Color and Vision” and “Physics of Sports” for non-science major students. In particular, his “Physics of Sports” is the first such course in the U.S. and most likely in the world. He has been interviewed numerous times by various media for his expertise in particle physics as well as physics of sports. He truly loves sports, and follows all major sports and sports events. He is SUNY Distinguished Professor in Physics. 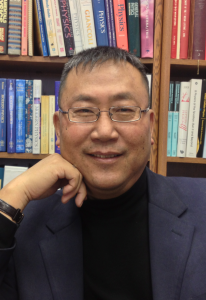