In this talk Prof. Scott will explore the science of laughter – addressing its evolutional roots, the ways that it is produced by the body, and its acoustic properties. She will also map out aspects of its neural bases and show how laughter is primarily a social emotional expression, which is related to humor but has a wider communicative role in human interactions.

Sophie’s research originates in the neurobiology of speech and sound processing, where she has made fundamental contributions to our understanding of how models of auditory processing from non-human primate neurophysiology and neuroanatomy can be used to guide our understanding of the human speech processing. (e.g. Jasmin, Lima and Scott, 2019). She has also developed a program of research into the ways that human voices convey more information that just spoken language, and has carried out a novel strand of research into the perception of human laughter, and its role in communication.

Sophie was appointed Deputy Director at the ICN in 2013 and was promoted to Director in 2019. She was elected as a Fellow of the Academy for Medical Sciences in 2012, and the British Academy in 2016. She was the Royal Institution Christmas lecturer in 2017, and was awarded Commander of the Order of the British Empire in the Queen’s Birthday Honors in 2020. 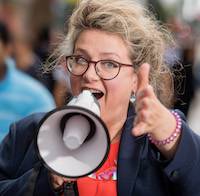