For over 30 years, scientists have been going to the bottom of the Earth to the geographic South Pole to make observations of the relic heat from the Big Bang, often called the cosmic microwave background (CMB). Dr. Brad Benson will give a brief history of these measurements, talking about the challenges associated with building experiments at one of the coldest, most remote places on Earth. Explore how these measurements are revolutionizing our understanding of the origins, content, and evolution of the Universe, including the surprising discovery that nearly 95% of the Universe is comprised of two mysterious components: Dark Matter and Dark Energy. Dr. Benson will also discuss new measurements designed to understand physics within the first fraction of a second after the Big Bang and how these instruments have also recently been used to take the first direct image of the black hole at the center of the Milky Way galaxy, as part of the Event Horizon Telescope project.

Dr. Benson is an experimental cosmologist who studies the cosmic microwave background: the relic radiation from the very early Universe, which was emitted only 380,000 after the Big Bang. His research takes him to the very ends of the Earth, namely the South Pole, where he builds instruments designed to answer some of the biggest questions in cosmology: What physics was responsible for the Big Bang? What is the Universe made of? What is Dark Energy? A senior members the Kavli Institute for cosmological physics and an Assistant Professor in the Department of Astronomy & Astrophysics at the University of Chicago, Brad is also an Associate Scientist at Fermilab. 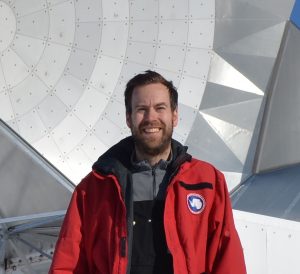