From time immemorial humans have been charting the night sky and trying to make sense of it and contemplating their place in the cosmos. Dr. Natarajan will recount the evolution of celestial map-making and show how maps literally track our ever evolving cosmic view. Tracing our understanding of the universe, its contents and its evolution – the lecture will examine recent developments in our understanding of two invisible entities: dark matter and black holes.

Dr. Priya Natarajan is a theoretical astrophysicist in the Departments of Astronomy and Physics at Yale University, interested in cosmology, gravitational lensing and black hole physics. Her research involves mapping the detailed distribution of dark matter in the universe exploiting the bending of light en-route to us from distant galaxies. In particular, she has focused on making dark matter maps of clusters of galaxies, the largest known repositories of dark matter. Her first book aimed at the curious public, titled Mapping the Heavens: The Radical Scientific Ideas That Reveal the Cosmos was published in 2016 by Yale University Press. The book received an honorable mention in the Cosmology and Astronomy Section. (bio courtesy of www.astro.yale.edu) 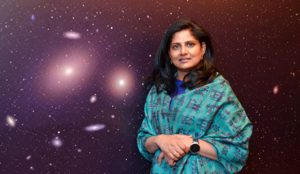