Special event sharing the first result from the Muon g-2 experiment!  This event will also be broadcast live on Fermilab’s YouTube Channel.

On April 7, 2021 the Muon g-2 experiment hosted at the U.S. Department of Energy’s Fermilab National Accelerator Laboratory released its long-awaited first results. The results show fundamental particles called muons behaving in a way that is not predicted by our best theoretical model of the subatomic world, the Standard Model of particle physics. Read the full press release.

In the experiment, muons (like electrons but heavier) race around our 150 foot circumference magnetic racetrack, wobbling as they go like tops slowly spinning on their axes. Quantum Mechanics allows for “virtual” subatomic particles to ever so briefly come in and out of existence and affect the wobble of our muons. The Fermilab experiment measures this wobbling with more precision than ever before. The previous incarnation of this experiment, performed two decades ago at Brookhaven National Laboratory on Long Island, NY, measured a small discrepancy from the theoretical prediction and hints that muons were influenced by perhaps undiscovered particles. Their hint was not strong enough to claim discovery but compelled Fermilab to perform the experiment again with many improvements. After years of planning, an amazing land & sea journey of the magnetic ring, assembly, testing, and operations, we have our first result from our data. Will we confirm or refute the Brookhaven discrepancy? We will discuss that and what these wobbling muons in a magnet can tell us about the particles that make up our Universe.

Adam Lyon is a senior scientist and associate division head at Fermilab. He specializes in computing for experimental particle physics – both traditional classical computing and more recently quantum computing. He joined the Fermilab Muon g-2 experiment at its founding in 2011.

This talk will be presented virtually on the Zoom platform. Reserve your spot at events.fnal.gov. You will be contacted closer to the lecture date regarding the Zoom link. Fermi National Accelerator Laboratory is operated by Fermi Research Alliance, LLC for the U.S. Department of Energy. 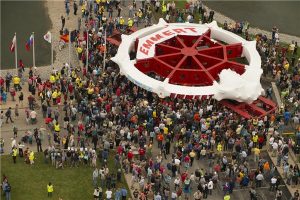