Imagine having the ability to explore inside the pyramids of Chichén Itzá.  Fermilab/QuarkNet’s Mark Adams was part of a team that assembled a plan and a detector to make that happen using cosmic ray muons.

In March of this year, the pyramid team, consisting of seven colleagues from Chicago State, Dominican University, University of Virginia, University of Mexico, and QuarkNet (Mark), Ben Stocker from Skender Construction, travelled to Chichén Itzá, along with students from Chicago State University and University of Virgina. The goal was to understand the exact size and location of spaces in the tunnels where future cosmic ray trackers can be located. The team established a working relationship with on-site archaeologists, created laser (drone) maps of the interior tunnels (exterior) of the pyramid documented all spaces, measured the cosmic ray rates throughout the tunnels;,and debugged the existing electrical system that had been partially melted in a lightning strike, creating beautiful laser maps. The archaeologists also invited NAUM (Non-Invasive Archaeometry Using Muons) to map another ruin in the future and to make a drone video of another building for a presentation to the president of Mexico later this year. Mark uploaded cosmic ray data from the pyramid to e-Lab upon his return.

Mark Adams is an emeritus professor at the University of Illinois Chicago, and part of the Fermilab Office of Education and Public Engagement, bringing cosmic ray experiments to high school students through QuarkNet. 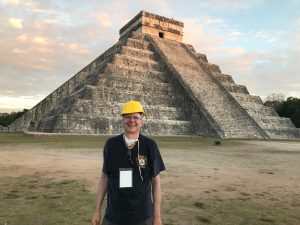