The Mystical Arts of Tibet tours, featuring the famed multiphonic singers of Drepung Loseling monastery, have taken the world by storm.  Endorsed by His Holiness the Dalai Lama as a means of promoting world peace and healing through sacred performing art.  They have performed in many of America’s greatest theaters and music halls. Among their many accomplishments:  soundtracks of Seven Years in Tibet, and shared the stage with Philip Glass, Kitaro, Paul Simon, Sheryl Crow, Michael Stipe, Patti Smith, and Natalie Merchant.

In Tibet, whenever a monastery celebrated a spiritual festival, people from the surrounding villages and nomadic tribes would assemble in the monastery’s courtyard for the three or four days of sacred music and dance.   Sharing this tradition, Sacred Music/Sacred Dance is made of selections believed to generate energies conducive to world healing. Robed in magnificent costumes and playing traditional Tibetan instruments, the Drepung Loseling monks are particularly renowned for their multiphonic chanting known as zokkay (complete chord). Each of the main chantmasters simultaneously intones three notes.  The Tibetans are the only culture on earth that cultivates this most extraordinary vocal ability. 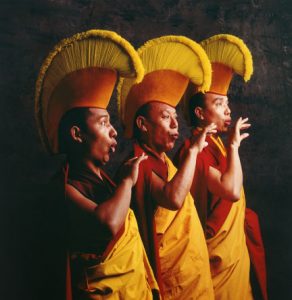