Harold McGee writes about the chemistry of food and cooking. He took up this odd vocation after studies at the California Institute of Technology and at Yale University, where he wrote a doctoral thesis with the prophetic title “Keats and the Progress of Taste.” After several years as a literature and writing instructor at Yale, he decided to practice what he’d been teaching, and write a book: a book about the science of everyday life. The result was the publication in 1984 of a 680-page compendium, On Food & Cooking: The Science & Lore of the Kitchen. His timing was lucky: America and Britain were awakening to the pleasures of good food and to the diversity of world cuisines, and On Food & Cooking helped satisfy the growing hunger for information about ingredients and techniques. Six years after On Food & Cooking, in 1990, he published a shorter and more personal book, The Curious Cook: More Kitchen Science and Lore. It’s currently out of print. Then in 2004, after working on it for ten years, he published the second, completely revised and significantly expanded edition of On Food & Cooking, which won several awards. And in 2010, Penguin Press published his practical kitchen handbook Keys to Good Cooking: A Guide to Making the Best of Foods and Recipes.

Along the way he has contributed reviews and original research to the scientific journal Nature, and have written articles for many publications, including World Book Encyclopedia, The Art of Eating, Food & Wine, Fine Cooking, and Physics Today. For five years he contributed a column on science and food, “The Curious Cook,” to The New York Times. He has taught two-day courses at the French Culinary Institute in New York, and talk about food chemistry at such venues as the Culinary Institute of America and other professional schools, at Madrid Fusion, at universities, the American Association for the Advancement of Science, and the American Chemical Society. Since 2010, he has been a visiting lecturer at Harvard University in their course “Science and Cooking: From Haute Cuisine to Soft Matter Science.” 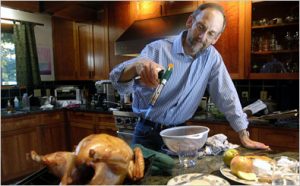