Sorry – this event is sold out.

No wait list is available prior to the night of the Physics Slam.

This annual event has become the hot ticket of the season. Five different scientists and engineers get a short window of time to introduce and woo you to their particular brand of science, and they will resort to anything to win your adoration. Previous slammers have dressed like Dr. Who, channeled Elvis, created Claymation, and last year’s winner was a physics rapper. Who will win the coveted prize of Slam Champ this year?

Just southwest of Wilson Hall, scientists and technicians are busy installing equipment for the new Muon g-2 experiment, which will start running next year. But what does it take to build a particle physics experiment? Why do you need hundreds of scientists to do it? And what is it like to work on an experiment like this one? Robin will take you on a behind-the-scenes tour of a particle physics experiment in progress, and share some lessons learned along the way.

Robin Bjorkquist is a graduate student at Cornell University. She works on the Muon g-2 experiment, and has been stationed at Fermilab since 2015. Before this, she studied physics at Reed College and worked at the Reed Research Reactor, where she developed a fascination for the inner workings of particle detectors and discovered her tour guide persona.

Since its beginning 13.8 billion years ago, our universe has been expanding, cooling, and changing with time. As it has grown, the contents of our universe have transformed as well. Together, we’ll take a tour through the story of our universe’s past, present, and future, following it as it evolved from a hot and dense bath of pure energy, through the formation of the first atoms, to the rise and domination of dark matter, and into our distant and strange future, dictated by by the forces of dark energy. Dan Hooper is a member of Fermilab’s Theoretical Astrophysics group and an Associate Professor of Astronomy and Astrophysics at the University of Chicago. His research lives on the boundary between particle physics and cosmology, where he studies topics such as dark matter, cosmic rays, neutrinos, supersymmetry and the early universe. He’s published over two hundred articles in scientific journals, and authored the books “Dark Cosmos: In Search of Our Universe’s Missing Mass and Energy” and “Nature’s Blueprint: Supersymmetry and the Search for a Unified Theory of Matter and Force”.

There are few absolutes in Nature. Science is the process of discovering that what we once thought were absolutes were simply manifestations of our own ignorance of the machinery of the Cosmos.  For the last 100 years we have held fast to an apparent absolute that has borne up under the intense scrutiny of billions of experiments: there is an ultimate speed limit in the Cosmos. The natural consequence of there being an ultimate speed limit is that if you can make gravity strong enough, you can create a black hole — an astrophysical monster from which there is no escape.  Not because you are too slow to get away (you ARE too slow to get away), but because the Universe prevents you from getting away. The idea of black holes is one that is discomfiting and unintuitive, but those emotions are built from your daily experiences with Twinkies, Yugos, and ping-pong balls. Even physicists and astronomers were uncertain about the existence of black holes for many decades. But today they are (more or less) an accepted part of astrophysics. The game for the last decade or more has been to observe what we can to answer a single question: what are black holes REALLY like?  While astronomers have been playing with their telescopes, and particle physicists have been building giant matchbox tracks for subatomic particles, a quiet group of gravitational physicists have been building a machine to plumb the depths of the Cosmos with gravity itself and discover the truth of black holes.

The great machine is called LIGO, and we have for the first time detected black holes directly by virtue of their intense gravitational strength. From the discovery of gravitational waves we have learned that black holes do appear to be inescapable — their gravity appears to be so strong you cannot get away.  We’ve learned they can be bigger than expected. We’ve learned they get together and make even bigger monsters in the Cosmic Sea. And we’ve confirmed what we have long suspected and feared: if you get too close, they will mess you up.

The pursuit of knowledge requires the building of unique, one-of-a-kind detectors.  These detectors don’t build themselves and sometimes require building tools to build the detectors.  I will discuss the engineering behind building the 14,000 ton NOvA far detector in northern Minnesota and why the engineers secretly have the most fun.  Dave is a thirty year veteran mechanical engineer hailing from Purdue and UIC who has worked on many projects and experiments at Fermilab.

How rare is .00000000000000003?  That’s the probability that you will be struck by lightning *and* your house will be hit by a meteor both within the next three months.  That’s also how sensitive the Mu2e experiment will be to a muon “converting” to an electron in the presence of an atomic nucleus.  That’s 10,000 times more sensitive than the best previous experiment, and if it happens, it would be absolute proof of new physics beyond our current “Standard Model”, which we know is incomplete.

Eric earned his PhD at the University or Rochester, working on an experiment at Fermilab.  After that he worked as a fellow at CERN and an Assistant at Princeton University before returning to Fermilab in 2001.  At Fermilab, he has served as head of the Proton Source and the US LHC Accelerator Research Program. He is currently working on the Mu2e Experiment as well as the Integrable Optics Test Accelerator. 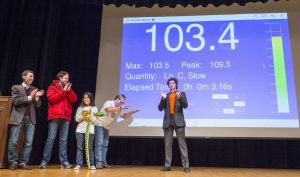