On-line ticketing for this event is available until noon on Friday, January 20.

Join us prior to the concert to kick off Fermilab’s 50th Anniversary with a special celebration starting at 7 pm in the Wilson Hall Atrium.

Mucca Pazza has been taking Chicago by storm, so what better way to celebrate Fermilab’s epic 50th Anniversary! Join us for the pre-party, and come on down to the auditorium for a concert that shows the full musical range of Mucca Pazza, starting in chairs then moving to their trademark funky marching band for the second part of the evening.

Prima Parte – Mucca Pazza, Sitting in Chairs
It takes more than gravity to keep Mucca Pazza sitting in chairs; it takes music stands and artistic discipline to keep the members of this mobile orchestra from bounding out of their seats and into the audience. Dressed for a formal affair in pastels and dinner jackets, this composers’ collective draws inspiration from Ellington, Esquivel, and Zappa, for a headier, swankier set than their usual off-the-chain rockers. The careful listener may recognize a movement by Stravinsky or a theme by Morricone, or the somehow-familiar soundtrack to a nonexistent film. Still staying true to their mobile roots, Mucca Pazza embodies the music, making their intricate compositions and lush cinematic arrangements visually accessible to all audiences. Cheerleaders, now Masters of Ceremony, play host to a set that will surely incite future and former band geeks to rescue instruments from dust bunnies, lockers and local pawn shops.

Seconda Parte – Mucca Pazza, A Little Marching Band
Despite the drums and brass, cheerleaders and uniforms, Mucca Pazza seldom marches, musically or physically. The uniforms do not match. The cheers are strange. There are no recognizable patterns, no discernible formations, no militant airs. However, the force and presence of a marching band remain, both sonically and theatrically. The brass harmony, rich and powerful, the drums, tight and idiosyncratic, combine as a sum greater than its parts. The band might even move from point A to point B. But this is where similarities end. Mucca Pazza dances, flails, tumbles, and spins in circles. Amplified by speaker helmets, the freak section wields violins and cellos, accordions and guitars – instruments that have no business whatsoever being in a marching band. The cheerleaders rouse, encourage and confound the audience with asynchronous absurdity. The music moves from Balkan to brass band groove to noise-rock to avant-garde game show themes without missing a step. Performances can induce geeky freak-outs and nerdy rapture, from either audience or band members, often both. The American tradition of the marching band – whether as presidential entourage, half-time show, or second line party favor – receives both fresh love and artful abuse from Mucca Pazza. 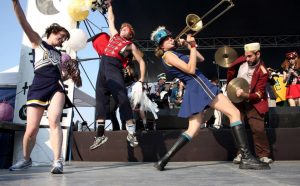