NASA’s Mars 2020 rover mission is designed to investigate key questions related to the habitability of Mars and will conduct experiments that set the stage for future human exploration of Mars. The rover will acquire and cache samples of rock, regolith, and will drill “blank” samples for possible return to Earth by future missions. Mars 2020 has a unique biological contamination plan to both protect Mars as well as the scientific integrity of the collected sample.  The entire flight system is subject to microbial reduction requirements, with specific emphasis on the sample acquisition and caching system. This talk will provide a mission overview, and an introduction to Planetary Protection, and describe why it is an important aspect of space exploration.

Dr. Moogega Cooper Stricker received her B.A. in Physics from Hampton University in 2006. She then enrolled in Drexel University where she received her Masters and Ph.D. in Mechanical Engineering with a concentration in thermal fluid sciences. Her dissertation studies involved non-equilibrium plasma sterilization of spacecraft materials so it was a logical transition to work for the Jet Propulsion Laboratory’s (JPL) Planetary Protection Group. Her current projects include the Mars 2020 Mission where she is the Lead of Planetary Protection and developing sterilization capabilities for future mission use. Moo was profiled by LA Weekly in its 2014 People Issue as one of the city’s most fascinating Angelenos. According to the LA Weekly, she was “named rainbow or ‘moo-jee-gae’ by her Korean mother and raised by her African-American World War II veteran father.” Moogega graduated from high school at 16, and at 24 earned her Ph.D. Apart from her work at JPL, she trains for triathlons and enjoys giving outreach presentations. 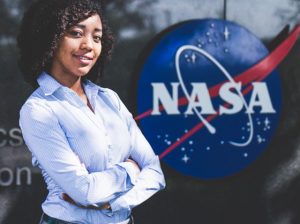