This lecture will be rescheduled, exact details t.b.d.

Tickets issued for the May 15 date will be valid for the rescheduled date.  If you already have tickets (either in your possession or at will call) and wish to attend this event, there is no need to do anything – your tickets will be good.

If you wish to exchange for another lecture, transfer the value of your ticket purchase into a gift certificate for any event in the remainder of this season or the upcoming 2020-2021 season, or get a refund for your tickets, please contact us at boxoffice@fnal.gov to let us know your intent.    Please be sure to include your daytime phone number so that we can clarify any questions.

Thanks for your flexibility,

When Mama, the alpha female of a famous chimpanzee colony on a forested island at Burgers’ Zoo, the Netherlands died at the age of 59, her final hug with Professor Jan van Hooff went viral on the Internet. Dr. Frans de Waal will discuss their encounter in his lecture on Friday, May 15 at Fermilab’s Ramsey Auditorium.

Dr. de Waal explores evidence for animal emotions, starting with primate facial expressions. These expressions are sometimes described as grimaces — misled by the apes in Hollywood movies, who are trained to pull weird faces — but primates have an incredible variety of expressions that are as meaningful to them as our own expressions are to us. They  laugh when tickled, pout when disappointed, and stare with a frown when angry. Charles Darwin concluded long ago that if apes use expressions similar to ours under similar circumstances, the underlying emotions are probably similar, too.

Feelings behind emotions are harder to know, however. In humans, we often get our information from language, a somewhat questionable source. With animals we don’t have this luxury, hence feelings remain inaccessible. But the emotions themselves are visible and measurable as they are expressed in the body and lead to behavioral changes. Animal emotions have become a respectable topic of study.

All of our emotions can be found one way or another in other species. The whole idea that there is just a handful of “basic” or “primary” emotions (fear, anger, joy), and that all other emotions (jealousy, guilt, love, hope) are uniquely human doesn’t make sense. Emotions are like organs. We possess not a single organ that is unique to us. Similarly, although we have emotions that go deeper or are more varied than in other species, none of them is entirely new, including empathy and disgust as examples.

Dr. Frans B. M. de Waal is a Dutch/American biologist and primatologist known for his work on the behavior and social intelligence of primates. His first book, Chimpanzee Politics (1982), compared the schmoozing and scheming of chimpanzees involved in power struggles with that of human politicians. His scientific work has been published in hundreds of technical articles in journals such as Science, Nature, Scientific American, and outlets specialized in animal behavior. His popular books – translated into 20+ languages – have made him one of the world’s most visible primatologists. His latest books are Are We Smart Enough To Know How Smart Animals Are? (Norton, 2016) and Mama’s Last Hug (Norton, 2019). De Waal is C. H. Candler Professor Emeritus at Emory University, in Atlanta, and Distinguished Professor Emeritus at the University of Utrecht. He was selected in 2007 by Time as one of The Worlds’ 100 Most Influential People Today and in 2019 by Prospect Magazine as #4 out of the 50 “world’s top thinkers.” 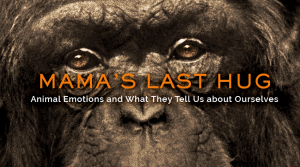