This will be a journey of connecting Blackfoot language to gravitational wave astronomy.  The LIGO/Virgo/KAGRA collaboration includes many people from around the world, all with their our own stories.  Corey Gray’s story will include a behind the scenes look at what it’s been like working at a land-based gravitational wave detector since 1998 (last century!).  Additionally, he will share a  “Top 3” list of his favorite detections, as well as the experience of a son having the opportunity to recruit his mother to work with him because of language—the language of spacetime and the Blackfoot people.

Corey is a member of the Siksika Nation (Northern Blackfoot tribe of Alberta) and Scottish. He received Bachelor of Science degrees in Physics and Applied Mathematics from Humboldt State University (HSU) in northern California. After graduation, he was hired as a Detector Operator by Caltech (California Institute of Technology) to work for the astronomy project, LIGO (Laser Interferometer Gravitational wave Observatory) at their observatory in Washington state. As a member of the LIGO team, Corey’s work includes working with groups to help build the gravitational wave detector, and also operating the detector as a member of the operator team. Corey has been with LIGO since 1998. The LIGO Scientific Collaboration (LSC) made big news in 2016 by announcing what has been hailed as “the scientific breakthrough of the century”: the first direct detection of gravitational waves. This was a monumental discovery because it proves a prediction made 100 years earlier by Albert Einstein! LIGO has made many more detections over the years. These detections mark the beginning of a completely new field of science: gravitational wave astronomy.  Corey also enjoys outreach & science communication. Over the years he has given keynotes, plenary talks, public colloquia, conference panel sessions, and also a TEDx talk. His speaking engagements have taken him from Banff to Orlando, Montreal to Honolulu and many points in between. He especially loves to share the science of Einstein with Indigenous youth and other underrepresented groups.

Some background from Corey…

“I do not speak Blackfoot.  This is not an accident.  It was part of the federal policies of Canada and the United States to steal Indigenous children away from their parents and force them to live at residential schools (or boarding schools).  Residential schools were a part of federal Assimilation policies.  At these “schools” children were forced to NOT practice their culture and NOT speak their languages.  The horrors of these schools is well documented but is not covered in history classes.  Residential school is generational trauma for Indigenous peoples still felt to this day.  Sharon Yellowfly (Corey’s mother) is a survivor of the Crowfoot residential school on the Siksika Nation.

“Language is the backbone of a society.  Because of the resilience of survivors of these residential schools, some languages also survived (Sharon and her classmates would secretly speak Blackfoot behind the backs of nuns and priests at the Crowfoot & Old Sun residential schools on the Siksika Nation.) Although I did not learn Blackfoot growing up as a child in southern California, I still lived with it by hearing conversations my mother had with her parents on the phone almost daily.  Sharon Yellowfly also took it upon herself to work on making a Blackfoot dictionary as a young mother in the 1970s; this work later included making recordings of her parents, Percy & Cecile Yellowfly.  Sharon did this work for her children and we grew to see the importance of language.

“Fast forward to early 2016, and we are at the moment when the historic announcement of the first direct detection of gravitational waves from a pair of merging black holes was about to be shared with the world.  As translations of the press release were discussed amongst the LIGO Scientific Collaboration, I saw this as an opportunity to share the beauty of the Blackfoot language with the world by having an important scientific document translated into an Indigenous language for the first time ever.  Sharon Yellowfly along with help from family up in Siksika worked on creating a Blackfoot translation for the LIGO press release in February of 2016. 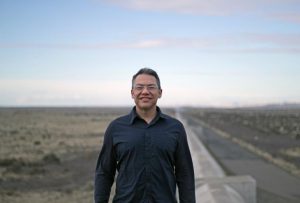