Online ticketing for this event is available until noon on Friday, October 28.

Direct from Barcelona, Las Migas is unique among Spanish music groups, an all-female ensemble that creates fascinating blend of Flamenco and Mediterranean styles, combining classic and contemporary rhythms, and melodies that range from powerful to passionate to playful.

The four women of Las Migas come from four different cities that span not only the geography of Spain but also its cultural diversity–Barcelona, Sevilla, Cordoba and Lerida. The two Andalusians are the guitarists: Marta Robles, the veteran, and Alicia Grillo, the most recent and youngest musician of the group. The two Catalans are Alba Carmona on vocals, and Roser Loscos on violin. They all came to the group with one common passion: Flamenco. You can hear it in the rhythms of the guitarists, the dancing violin lines, and the raw power of the vocals. Alba is also a gifted dancer. However the group has more than just Flamenco in their repertoire. As the group has evolved, Latin rhythms gave the music a happier, more upbeat sound. And a sensitive side began to emerge with beautiful ballads as Alba expanded her emotional range. The violin lines became more pensive and the guitar arrangements became more complex and intertwined. The dance became more interpretive and free-flowing. The new Las Migas style was established, and has thrived.

From the beginning, the Barcelona-based quartet has filled big theatres and has performed in some of the most important World Music festivals. Their music is luminous, with a strong Latin touch. Their style on stage, reflects a richness that enhances the impact of the music. 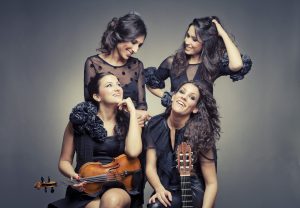