CD Reviews: “Marvelous and dramatic flute recordings by increasingly recognised star performer Ian. Brilliant, brave, moving.” – Musician; “This is an amazing recording. Clarke’s playing is incredible in every way.” – Flute Talk; “This is an inspiring and refreshing collection of music for flute, performed brilliantly!” – Flute Focus; “This disc is one of the most innovative released in recent years, and not just in a flute context.” – PAN; “Brilliant performances; don’t miss this one.” – South Australian Flute News; “Deep Blue, is another remarkable recording from a remarkable musician. Clarke has created a sound world entirely his own …” – Flutist Quarterly

Ian Clarke is acknowledged as one of the leading player/composers in the flute world. His compositions are performed across the globe and these wide-ranging published works have established themselves as some of the most exciting flute repertoire of today and are being embraced by internationally acclaimed performers, syllabuses, teachers, colleges & students alike.

Ian has performed as a featured guest soloist and teacher at major conventions and events in Brazil, Canada, Iceland, Japan, many European countries and numerous times for the British Flute Society (BFS) and for the NFA (National Flute Association) in the USA.  He is currently completing a new concerto for flute & strings which he will premiere at the 2017 Minneapolis convention.  His acclaimed CD ‘Within’ has been one the flute world’s best sellers and his album Deep Blue reached the top 10 in the UK Classical Artist Chart; thought to be a first for an album of original flute music. He has given master-classes at many of the leading music conservatoires including London’s Royal Academy of Music (RAM) & Guildhall School of Music & Drama (GSMD) through to New York’s Juilliard & MSM and in countries from Brazil to Japan.  In his career he has performed in genres ranging from classical opera to a guest appearance with rock group Jethro Tull/Ian Anderson. He has had a long relationship with Flutewise (UK) and has been their artist of the year and Ian has been a guest artist at many of the top flute courses. Along with RAM’s Clare Southworth, he co-led the Woldingham International Summer School for many years. In 2016 he featured in the Complete 21st Century Flutist course in California.  In 2017 Grolloo Flute Session 3 will be Ian’s 3rd annual collaboration with Matthias Ziegler, Wissam Boustany, Tim Carey and Eva Kingma in the Netherlands and Ian will again be teaching and playing at the Scottish International Flute Summer School in 2017.  Through leading, co-leading and taking part in a myriad of flute events, Ian has enjoyed working with all ages and stages in flute-land and beyond.

Ian has worked extensively with musician/composer Simon Painter writing, producing and performing music for film & television under the name of Diva Music (www.divamusic.co.uk) 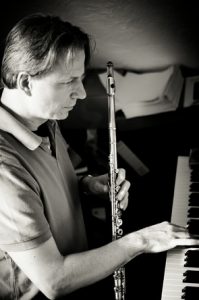