This event is presented in collaboration with the Fermilab Family Open House.

In Part II of a multi-part virtual series, Jorge Morfin will follow the path of an experiment from inspiration through the proposal and approval process, using neutrino experiments as examples. Jorge has been deeply involved with accelerator-based neutrino experiments for over four decades, being involved with the Gargamelle experiment’s first probes of the structure of the nucleon with neutrinos and having presented results from the Gargamelle experiment at the very first Neutrino Conference in Balaton, Hungary, in 1972.

At Fermilab, after managing its installation, he continued his studies of nucleon structure and nuclear effects with the Tevatron Muon Experiment. He then initiated the establishment of the MINERvA neutrino-nucleus scattering experiment and served as MINERvA collaboration co-spokesperson for six years. Within the MINERvA physics program, he continued working with students in the study of nuclear effects, including the structure of the nucleon in the nuclear environment.

Importantly, Jorge has also been deeply involved in educational outreach and created the MINERvA Latin American Initiative, which has attracted multiple groups from various Latin American countries to come to Fermilab and conduct their research on MINERvA. He has mentored over 40 Latin American graduate students in obtaining their M.S. and/or Ph.D. degrees.

Jorge has also forged new pathways for collaboration between theorists and experimentalists. Collaborating with the theorist Wu-Ki Tung, he used global experimental results and Quantum Chromodynamic formalisms to better define the internal structure of the nucleon. Along the lines of this successful effort, the CTEQ collaboration of experimentalists and theorists was established. Within CTEQ he initiated the CTEQ Summer Schools on QCD Analysis and Phenomenology, organizing many of the 26 CTEQ QCD schools.

Jorge is also one of the founders and initial co-spokesperson of the NuSTEC collaboration, an organization of neutrino theorists and experimentalists, modeled after CTEQ, to study neutrino nucleus scattering physics and sponsor the community’s only main schools on this topic. In addition, NuSTEC workshops and projects directly confront the many challenges in neutrino scattering physics facing the community.

If you missed Part I (Theory by Dr. Marcela Carena), no worries!  Each talk is intended to stand alone, but they will also be made available on video.

Bio provided in part by fnal.gov 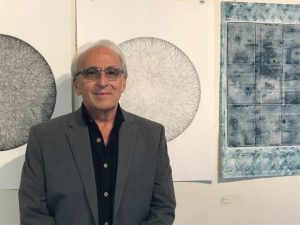