Join us for Part III of our How to Do Big Science Series when Deborah Harris, recovering Project Manager of the MINERvA Detector Construction Project and York University professor, shares her experience in a talk called “MINERvA: I Can’t Believe We Built the Whole Thing.”

If you missed Parts I and/or II, no worries – they are available on video.

About Deborah Harris (Courtesy of yorku.ca)

My first introduction to physics was as an undergraduate just trying to get a summer job.  I helped to build detectors at Fermilab that were eventually used to measure the particles that came out of high energy collisions at the CDF experiment at Fermilab.  Building these detectors made me appreciate the art of trying to “see” particles that were not visible to the human eye.

I graduated from University of California-Berkeley with a major in Physics (and only a class or two away from a minor in French).  I then went to the University of Chicago for graduate school, where I joined “E799” (this was before experiments had cool names) and searched for very rare decays of a particle that mostly just gets produced in high energy collisions, but is almost its own antiparticle, the long-lived neutral kaon.  After graduate school I worked as a postdoctoral researcher for the University of Rochester where I started (finally) doing research on neutrinos, although these neutrinos were much higher in energy than the neutrinos I’m studying now.  This experiment called NuTeV made the single most precise measurement (at that time) of the force that governs weak interactions.

My next job was working for Fermi National Accelerator Laboratory, where I was a staff scientist for almost twenty years.  During that time I was lucky enough to do research on two different neutrino experiments:  MINOS, one of the first experiments to make a beam of neutrinos in one place and then measure them hundreds of miles away, and MINERvA, whose goal is to write the book on all the ways that neutrinos and antineutrinos interact in many different kinds of nuclei (from helium all the way to lead!).  I was the project manager for the MINERvA construction project, and then in 2010 I was elected to be the Scientific Co-spokesperson of the experiment, a position I’ve held since then.

Starting in 2019 I moved to York University in order to take a joint position between York and Fermilab, and I was able to try something completely new:  teaching!  I have always been interested in the learning process and now I get to see it from much closer than ever before, while still getting to do research. 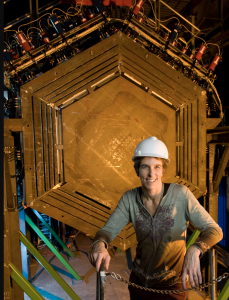