Clifford V. Johnson is a theoretical physicist passionate about sharing science with the public. He wanted to write a book about physics to a lay audience, but he felt that words on a printed page did not fully convey the dynamic, collaborative nature of fundamental research. What if, he wondered, you could represent multiple voices and points of view? What if one could make the reader feel immersed in scientific discourse, rather than reading the words of an expert sharing a single perspective? He wanted to write a book that would give readers a fly-on-the-wall experience of exploring the ideas themselves, a key process of fundamental science. Johnson realized that graphic novels are the unique narrative medium he was searching for. Through the written word and compelling visuals, graphic novels can immerse the reader in a world of ideas and sensations. This realization led Johnson to write and draw The Dialogues: Conversations About the Nature of the Universe (MIT Press), which allows readers to eavesdrop on a series of dialogues, set in locations around the world, about cutting-edge scientific topics. In his talk, Johnson will discuss the process of turning complex scientific topics into compelling visual narratives. The talk will be “graphic,” but in a family-friendly way.

Clifford V. Johnson’s work in science ranges from teaching and research into black holes, particle physics, string theory, and cosmology, to public outreach where he strives to put science back into the general culture. He helps artists, writers, and filmmakers incorporate science into their work, and appears on several TV and online shows. He has been a science advisor for many TV shows and movies, including Nat Geo’s Genius (featuring Einstein), Marvel’s Agent Carter, Thor: Ragnarok, Avengers: Endgame and Infinity War, and more. 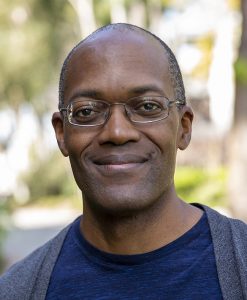