Enrico Fermi is unquestionably the most famous scientist to come from Italy since Galileo, so revered by his peers that he was known as “the Pope,” because his scientific instincts and skills were said to be “infallible.” A physics Nobel Prize winner in 1938, he was one of the most productive and creative scientists of the twentieth century. His work changed our world with the advent of nuclear reactors, weapons of mass destruction and life-saving medical interventions. Fermilab, the largest particle accelerator in the United States, bears his name as does the nation’s most significant presidential award in science and technology. The list of scientific advances named after Fermi is among the most extensive of any modern day physicist.

Fermi’s famous experiment on conducting the world’s first nuclear chain reaction took place under the stands at a football field at the University of Chicago and was critical in subsequently building the atomic bomb. As the 75th anniversary of this event nears, Gino Segrè and Bettina Hoerlin bring this scientific visionary to life. Their widely praised book THE POPE OF PHYSICS: Enrico Fermi and the Birth of the Atomic Age, has been called “…a superb biography…a definite study of Fermi’s life and work” by the Wall Street Journal. In their Fermilab lecture, the authors plan to discuss Fermi from his modest beginnings in Rome amidst the tumultuous environment of Italian fascism and anti-Semitism to his immigration to America and becoming a key figure in the Manhattan Project. Segrè and Hoerlin will delve into Fermi’s personal and scientific life and how political and social forces shaped the man, and how he, in turn, shaped them. This unassuming man struggled with issues relevant today, such as the threat of nuclear annihilation and the relationship of science to politics.

Gino Segrè is a professor of physics and astronomy at the University of Pennsylvania. He has been a visiting professor at MIT and Oxford University, chair of the Department of Physics and Astronomy at the University of Pennsylvania, and director of the theoretical physics at the National Science Foundation. He is the author of three books of scientific history: Ordinary Geniuses, Faust in Copenhagen, and A Matter of Degrees. Fermi inspired Segrè to become a physicist, so the desire to commemorate him in a biography was deeply felt. In addition, Segrè’s uncle, Emilio, was Fermi’s first student in Italy, later a long-time collaborator, and won a Nobel Prize of his own.

Bettina Hoerlin served as health commissioner of Philadelphia and taught at the University of Pennsylvania. She has been a visiting lecturer at Haverford College and Oxford University. She is the author of Steps of Courage: My Parents’ Journey from Nazi Germany to America. Though not a physicist herself, Hoerlin was the daughter of one, and grew up in the Atomic City of Los Alamos. Like her husband and co-author, Gino Segrè, Hoerlin’s parents fled anti-Semitism in Europe at the same time that Fermi did. Hoerlin and Segrè’s exhaustive research took them to Rome, Pisa, the University of Chicago and Los Alamos, as well as to Trinity, the New Mexico site of the first nuclear explosion. 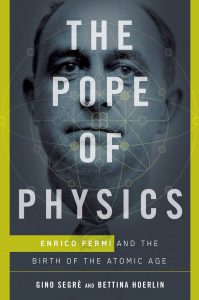