Online ticketing for this event is available until noon on Friday, March 31.

“People always ask me, “What’s your favorite Tiny Desk Concert?” Well, right now it’s the one recently performed by DakhaBrakha. The creative quartet from Kiev, Ukraine make music that sounds like nothing I’ve ever heard, with strands of everything I’ve ever heard. There are rhythms that sound West African and drone that feels as if it could have emanated from India or Australia. At times, DakhaBrakha is simply a rock band whose crazy homeland harmonies are filled with joy. All the while, they play tight-knit tunes featuring accordion, drums, reeds and shakers while wearing tall, Marge Simpson-looking wool hats that made me jealous.” – Bob Boilen, NPR’s Tiny Desk Concerts

“Rolling Stone’s “45 Best Things We Saw at Bonnaroo 2014” – Ukrainian folkdrone Bjorkpunk quartet Dakhabrakha went into Bonnaroo as unknowns but ended up with one of the most receptive crowds of the weekend. They got cheers for mournful accordion and apocalyptic cello sawing. Animal noises and bird whistles and howls got the audience to return favor, turning the tent into a happy menagerie.

DakhaBrakha is a quartet from Kiev, Ukraine. Reflecting fundamental elements of sound and soul, Ukrainian “ethno chaos” band DakhaBrakha creates a world of unexpected new music. DakhaBrakha was created in 2004 at the Kyiv Center of Contemporary Art “DAKH” by the avant-garde theater director – Vladyslav Troitskyi – and given the name that means “give/take” in the old Ukrainian language. Theater work has left its mark on the band performances – their shows are always staged with a strong visual element.

After experimenting with Ukrainian folk music, the band has added rhythms of the surrounding world into their music, thus creating the bright, unique and unforgettable sound of DakhaBrakha. They strive to help open up the potential of Ukrainian melodies and to bring it to the hearts and consciousness of the younger generation in Ukraine and the rest of the world as well.

Accompanied by Indian, Arabic, African, Russian and Australian traditional instrumentation, the quartets astonishingly powerful and uncompromising vocal range creates a trans-national sound rooted in Ukrainian culture. At the crossroads of Ukrainian folklore and theatre, their musical spectrum is at first intimate then riotous, plumbing the depths of contemporary roots and rhythms, inspiring “cultural and artistic liberation.”

In March 2010, DakhaBrakha won the prestigious Grand Prix prize named after S.Kuriokhin, in the sphere of contemporary art, and confirmed its place in the culture once again. In March 2011 DakhaBrakha was discovered by Australian Womadelaide and began their ascent in the international music scene. They have since played more than 300 concerts and performances and have taken part in major international festivals throughout Eastern and Western Europe, Russia, Asia, Australia, and North America. DakhaBrakha has also collaborated with such international musicians as: Port Mone (By), Kimmo Pohjonen Cluster (Fi), Karl Frierson (DePhazz) (Ge), Steve Cooney (IRL), Inna Zhelannaya (Ru), Kievbass (UA), Djam (UA-Iran), and David Ingibaryan (Hu).

“Geography is something that defines the sound of music and when I hear the Ukrainian music of DakhaBrakha and hear their out-of-this-world harmonies and rhythms, I’m reminded how narrow the avenues of creation can be. DakhaBrakha simply touched my heart deeply-conjured emotions of longing and uncertainty with songs sung in a language I don’t understand, but in ways music can universally convey…” – NPR’s Bob Boilen of Tiny Desk Concerts explaining his Top Ten Favorites 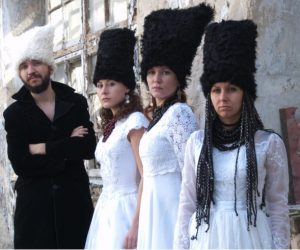