Special pre-performance talk @ 7 pm in One West
The Birth of Post-War Chicago Blues: The 1937-1938 Leland Bluebird Recording Sessions
Tickets now available! Click here to purchase tickets or call our box office at 630/840.ARTS (2787). On-line ticketing for this event is available until noon on Friday, September 9.

“Gritty Chicago blues and rarefied classical chamber music might not seem like a match made in heaven – until you’ve heard Corky Siegel bring the two together… a crowning achievement.” – Chicago Tribune

One of the world’s great blues harmonica masters, Corky Siegel, returns to Fermilab with a ground-breaking hybrid of classical and blues in a chamber music setting. Corky Siegel is joined by Sam Lay, a renowned drummer in the Blues Hall of Fame and the Jazz Hall of Fame and featured in the History of the Blues, produced by Martin Scorsese.

Corky Siegel has earned an international reputation as one of the world’s great blues harmonica masters. He is a composer, blues pianist, singer/songwriter . Corky Siegel’s career began with a fortunate break when he formed the legendary Siegel-Schwall Band that toured the major rock palaces and clubs in the 60’s and 70’s. He was introduced to the blues through his first steady engagement at Peppers, the internationally renowned blues club where his job included performances with blues masters such as Willie Dixon, Little Walter, Muddy Waters, and Howlin’ Wolf. “For groups like the Rolling Stones…names like Muddy Waters and Howlin’ Wolf were exotic inspirations. For Siegel-Schwall they were the guys that played with them on 43rd Street.”- Lin Brehmer, Music Director for WXRT radio.

Corky Siegel’s Chamber Blues project has earned tremendous acclaim throughout the country and continues to open new doors for classical and blues/jazz listeners alike. Chamber Blues won Billboard’s Editor’s and Writer’s Top 10 Picks of the Year and Stereophile Magazine says; “…fantastic…I’ve never heard anyone play harp with this much body and harmonic delicacy…I guarantee you’ve never heard anything quite like it.” The release of Traveling Chamber Blues Show is “A Crowning Achievement” raves the Chicago Tribune. “Watching them perform is nearly as much fun as hearing them play.” – Blues Revue Magazine.

The members of Chamber Blues include Jaime Gorgojo and Chisuan Yang, violins; Dave Moss, viola; and Jocelyn Butler, cello. Chamber Blues will be joined by Sam Lay. With an incredible career that started with the Original Thunderbirds in 1957, Sam Lay has performed with Willie Dixon, Howlin’ Wolf, and Muddy Waters. He was later a member of the Butterfield Blues Band, and was part of Bob Dylan’s band when they performed at the first Newport Folk Festival. In the late 1980’s Sam Lay was inducted into the Blues Hall of Fame in Memphis. He was recently inducted into the Jazz Hall of Fame in Los Angeles, and the Rock n’ Roll Hall of Fame in Cleveland. He was nominated eight times for the coveted W. C. Handy Award for “Best Instrumentalist” including a recent 2005 nomination. Mr. Lay was prominently featured on a PBS-TV broadcast of 7 episodes on the History of the Blues produced by Academy Award winning director, Martin Scorsese. 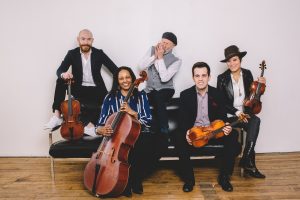