For many cancer patients the standard treatment for solid tumors is the use of high-energy x-rays. To create these x-rays, medical centers use particle accelerators that propel electrons to tens of millions of electronvolts and then collide them into a metallic target to produce the x-ray spectrum used for cancer treatments.

Physicist Robert Wilson, the founding director of Fermilab, proposed a different cancer treatment method when he published the article “Radiological Use of Fast Protons” in 1946. He suggested using heavy charged particles such as protons to deliver cancer-killing energy to tumors.  In the 1990s, Fermilab built the first proton accelerator dedicated to cancer treatment at a medical center. Today cancer treatment with proton accelerators is offered at about a dozen centers across the United States. The physical properties of high-energy protons allow for a more targeted deposition of radiation than with x-rays.  In some cases protons can be used to greatly reduce toxic radiation doses to healthy tissue that resides near the tumor, thus reducing treatment side effects.

When it opened in 2010, the Northwestern Medicine Chicago Proton Center in Warrenville was the ninth proton cancer treatment center in the United States. It remains the only center in Illinois that offers this advanced treatment option.  In the six years that the proton center has been open, the technology of delivering protons has continued to advance.  One of the cutting-edge advancements is the delivery method of Intensity Modulated Proton Therapy (IMPT), where the proton beam is delivered using a magnetically focused spot that provides control of both intensity and position of the proton beam. IMPT allows the physician to “paint” the radiation dose over the targeted tumor and allows unprecedented control of the treatment beam. This lecture will compare and contrast the different properties of both x-ray therapy and proton therapy and discuss where each modality can be used for the greatest benefits to the patient.

Dr. Mark Pankuch has been the Director of Medical Physics and Dosimetry at the Northwestern Medicine Chicago Proton Center since the day it opened.  He is a longtime resident of the Chicago area: He graduated from Waubonsie Valley High School in Aurora, attended Benedictine University in Lisle for his undergraduate studies in physics, and then completed his graduate work in medical physics at Rush University in Chicago.  He is a member of the American Association of Physicist in Medicine and is currently the President of its Midwest Chapter.  Pankuch is the Chair of the Medical Physics committee for the Proton Collaborative Group and is an active collaborator in many proton treatment protocols, including two that are attempting to determine the optimal role for protons in breast cancer treatments. 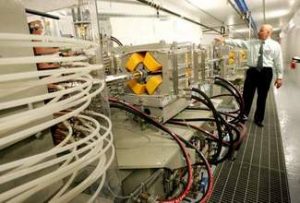