A notice of cancellation – your reply needed!

We regret to inform you that due to circumstances beyond our control, the Tom Crean: Antarctic Explorer play scheduled for February 22 has been cancelled.  We are exploring an alternate date, but meanwhile we want to offer you several options.

Exchange or upgrade tickets for these upcoming shows:

More information on the above events are available on our web page – events.fnal.gov. We can also offer a refund which will be distributed in the same method in which you paid.

If you have tickets, please notify us by replying to the cancellation email to ensure that you have received notification.  If we don’t receive an email response, we will be following up with phone calls.

Again, our sincere regrets.  We were all so looking forward to the show.  Mr. Dooley, the playwright and actor sends along his apology as well.

Tom Crean (1877-1938) the intrepid Antarctic explorer and one of Ireland’s unsung heroes is brought to life in this dramatic and humorous solo performance by Aidan Dooley.  Hear the riveting true stories of Crean’s Antarctic explorations as one of the few men to serve with both Scott and Shackleton and survive three famous expeditions: Discovery, (1901 – 1904); Terra Nova (1910 – 1913); and Endurance (1914 – 1916).

Crean’s story is a testament of human fortitude against all the elements of Antarctic, his 36-mile, solitary trek to base camp during the Terra Nova expedition to rescue his comrades Teddy Evans and William Lashly has been described by Antarctic historians as “the finest feat of individual heroism from the entire age of exploration”.

Aidan is from Galway, Ireland and wrote and first performed ‘Tom Crean – Antarctic Explorer’ ten years ago in Tralee, Ireland for Tom Crean’s family.  He then took the play to the New York International Fringe Festival where he was awarded Best Solo Show. He has also been nominated for awards at The Dublin Festival, Adelaide Fringe Festival and The Elliot Norton Theatre Critics Award Boston and in 2006 won the prestigious Fringe First at Edinburgh.

Aidan has worked for many years developing various performance pieces and historical characters for all the National Museums in England including the National Maritime Museum Greenwich where the idea of a performance on Tom Crean originated.

Save 20% on tickets for Tom Crean:  Antarctic Explorer by also purchasing tickets for the lecture by Brad Benson of the University of Chicago discussing contemporary Antarctic exploration with a talk on the South Pole Telescope on Feb. 28.  Call 630/840.ARTS to take advantage of this offer!  Please note that this is for full-priced adult tickets.  This offer cannot be combined with other discounts nor used on youth priced tickets. 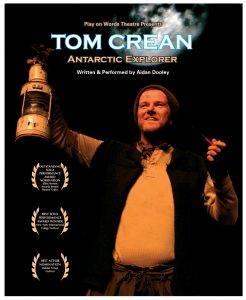